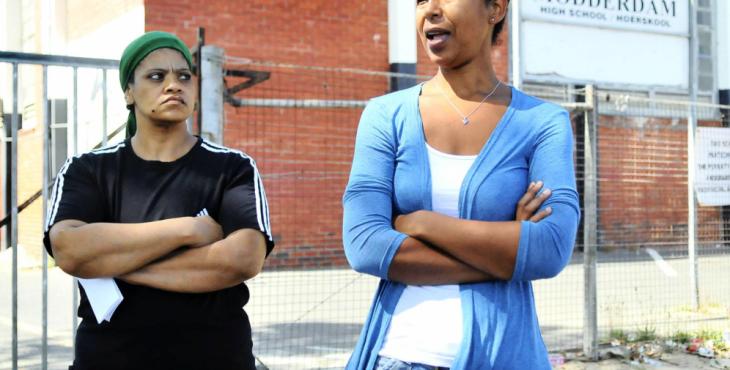 By: Saafia FebruaryCape Town – A vicious girl gang is causing havoc outside a Bonteheuwel high school where they are trying to recruit new members.

Terrified learners at Modderdam High say they have become rich pickings for the all-girl A-Team of Golden Gate.

But a gang war is now brewing because their rivals, the Stupas in the Backstreets, are hunting on the same grounds.

The learners, who asked not to be identified, say there are daily shootings and fights around the school as the gangsters try to get new members. Those who resist are beaten and bullied.

A frightened Grade 11 learner says she was hit on the head and terrorised not once but twice by two A-Team gangsters.

“They dragged me across the road and hit me two weeks ago and now again,” says the distraught girl.

“I have been avoiding going anywhere alone, because they said, the next time they catch me, they will kill me.”

Panicked parents have now been forced to drop off and collect their scared children at school.

Speaking outside the school gates on Thursday, mom Jody Abrahams, 34, says she fears for her son, who is in Grade 9.

“[The gangsters] camp out in front of the school and target the ones they want,” says the worried mother.

“These gangsters are taking our children from us. My child is too afraid to come to school and we need to know what is going to be done to help them.”

The school principal, Mrs Rayray, admits outside elements are trying to infiltrate her school.

“We are in the middle of a high crime environment. Learners and teachers are in danger,” says Rayray.

“On the school we do not tolerate anything but the utmost respect and an environment of learning.

“We cannot, however, control what happens outside.”

Jessica Shelver, spokeswoman for Western Cape Education MEC Debbie Schafer, says this is a matter for police: “A meeting is being arranged between the SAPS and the school principals in Bonteheuwel.

“SAPS needs to be more effective in the area.”

Meanwhile, the City’s mayoral committee member for Safety and Security, JP Smith, says he is only able to deploy his specially trained School Resource Officers for high risk schools at the request of the WCED.

Smith says: “I encourage the school to approach the WCED and we will act on their instructions.”